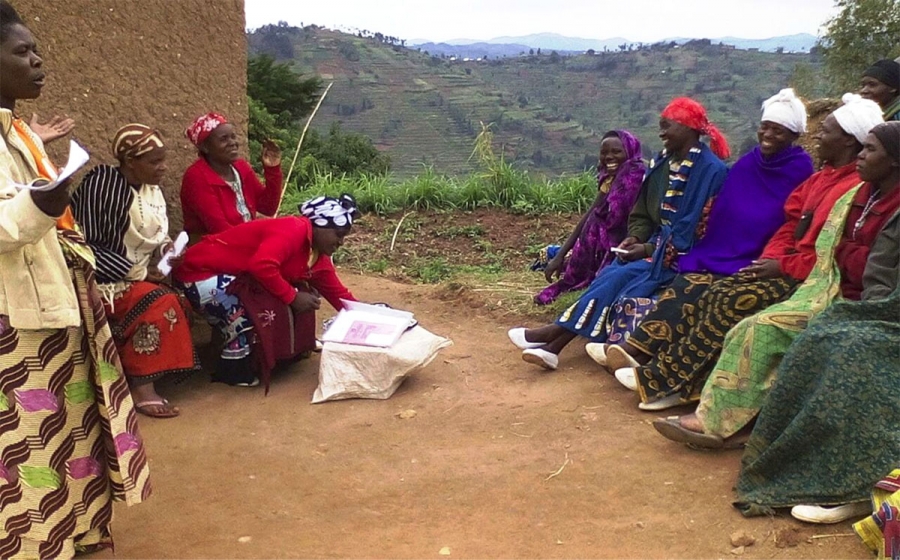 ‘The good rain is the rain which falls repeatedly’

Indashyikirwa is a multi-collaborator programme to prevent intimate partner violence prevention (IPV), across rural Rwanda. It is being implemented by CARE Rwanda, Rwanda Women’s Network (RWN) and Rwanda Men’s Resource Centre (RWAMREC). A critical component of the programme is the creation of women’s safe spaces dedicated to offering informal support to survivors of IPV, including a pathway for referral to formal services (i.e., health, criminal justice and social services). Drawing on their experience implementing the Polyclinics of Hope since 1997, the RWN established14 safe spaces, designed to address the health, psychosocial, and socio-economic needs of gender based violence (GBV) survivors. At each women’s safe space, 22 facilitators were recruited from the communities engaged in the programme and trained to offer dedicated support to women and men that report IPV, educate women about their rights, and refer or accompany individuals who wish to report abuse or seek health or social services.

Three mornings per week, the safe spaces are open to men and women to disclose GBV, and receive private support, referral and/or accompaniment as needed. In the afternoons, facilitators conduct group participatory dialogues around uses of power, gender equality, women’s rights and IPV primarily with women; on specific dedicated days, men are invited to join the discussions. Collective income generating activities, such as weaving or handicrafts, also take place in the afternoons.

A safe space facilitator in the Northern Province of Rwanda shared her perspectives on the impact of the women’s safe spaces in May 2018, towards the end of the programme. She related how the safe spaces have supported community wide change consistent with the government’s political backing of women’s rights:

‘I am telling you the truth that in this sector there were no women who were knowledgeable about their rights. Even when there was one who was knowledgeable, she didn’t have opportunities due to oppression. We were not given any value. Even though the Rwandan government has given us a word, still it was not respected. People used to say: ‘if you want to act according to what the president of the republic says you will destroy your marriage.’

But when the women’s space came and they saw that when a woman had a problem and she seeks help at the women’s space the problem gets solved, they started saying: ‘those women are really serious, they are really working. Give those women their rights.’ Really, Rwanda Women’s Network and those projects came at the right time because we were in trouble.

She also identified the impact of the safe spaces on couples’ relationships for the better:

Now there have been many changes and we have people and couples who give testimonies about their current situation and how their relationships have changed. There are couples where a husband and his wife could not share the meal but now they do. For instance, there is a man who had left his wife and went to Uganda but when he came back his wife has forgiven him. But I cannot even describe all things they have reached together! A man used to sell all things and spend all the money alone but now couples are sharing everything.

She emphasized the critical value of the safe spaces, and the necessity for them to continue:

Community members have become used to this women’s space and it has already helped many people. This women’s space came at the right moment and please tell those who sent you that they should keep it up. As the proverb says Imvura igwa ni isubira [the good rain is the rain which falls repeatedly] meaning you like something done and would like it done continuously in the future.’

Tagged under
More in this category: « Miriam’s Diary: Through the eyes of a young woman giving others a helping hand From hopelessness to happiness: The reflection sessions that changed a narrative in Rwanda »
back to top